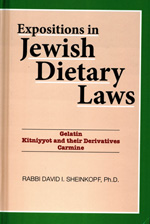 This kosher agency provides authoritative rabbinic supervision and certification to different types of gelatin and carmine that fully satisfy the requirements of orthodox Jewish dietary laws. Also, to companies that use these ingredients in a variety of other verifiably kosher items

Its founder, Rabbi Dr. David I. Sheinkopf has long been active in the field of kosher supervision. His works, Issues in Jewish Dietary Laws (Ktav 1988) and Expositions in Jewish Dietary Law (Ktav 2010), have established him as an international kosher certifier for products made in the USA, Europe, Asia, and South America. Rabbi Sheinkopf was ordained at Mesivta Rabbi Chaim Berlin and holds a Ph.D. in Talmudic studies from Yeshiva University (New York).

He is joined by his son and associate, Rabbi Noah S. Sheinkopf. A recognized rabbinic scholar, Rabbi Noah Sheinkopf pursued advanced studies in Talmud and Jewish Law at Or Yerushalayim (Israel) and Kollel Ayshei Avrohom (Monsey, NY). He was ordained at Rabbinical Academy Or Chaim (Queens, NY). Noted especially for his expertise in practical halakha, Rabbi Noah specializes in the use of modern day food ingredients and production methods that fully comply with orthodox Jewish dietary laws.